Adobe have not supported their Flash Player for Android devices for a long time, and thankfully the majority of sites have moved on to other media players and libraries. However, you still occasionally see the odd site which won’t work without it, and if you’re running a newer Android device it means you can’t see it. Help is now at hand however from the latest version of the Dolphin Browser. 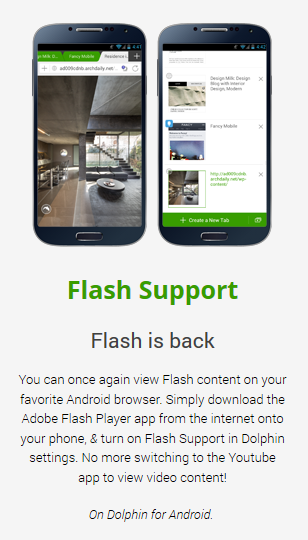 As well as offering Flash support, Dolphin also offers a wealth of other features for mobile users such as gestures, voice search, one-tap sharing and more. It’s free so it’s well worth having a look to see how it compares to your device’s current browser.

I’ve been tasked with getting a cheap Android tablet for a relative, and the best value for money that I could find in the price range was an Acer Iconia A1-810 with 7.9″ screen. The tablet is going to be used for web-browsing and iPlayer so a bigger screen is better.

The tablet was bought as a refurbished model from Argos’ eBay outlet. I can’t see anything obviously wrong with it, there are no marks on the case or screen and everything seems to be working perfectly, so that saved at least £20! The first noticeable thing is that the screen is 4:3 rather than 16:9, it looks more like an iPad mini than an Android tablet. It is slightly thicker than my LG G Pad 8.3, here is a poor quality picture showing them side by side:

The Acer is wider but the LG is taller. The wider screen does make it easier to view the BBC homepage, but the screen is inferior to the G Pad, with only a 1024×768 resolution compared to the G Pad’s 1920×1200. However, this is reflected in the price, as well as the difference in CPU, memory, storage, etc.

The screen seems responsive enough and whilst the picture image is not as good as the G Pad it will be perfectly suitable for what it will be used for. It runs Android 4.2.2 out of the box, I don’t know if it will ever get KitKat or Lollipop but I wouldn’t hold my breath! It runs adequately and for the money presents good value.

I am still using my Samsung Galaxy S3 – I can’t really afford or justify an upgrade at the moment, and I’d prefer to wait until some better phones become available on upgrade rather than choosing from what is available currently. The S3 is starting to show its age – it is 2 and a half years old now, a very long time in smartphone terms, and the 1GB of RAM limits how well it can perform.

I’ve installed a custom ROM, ArchiDroid, which has made a world of difference – whilst based on the original Samsung code (so the camera and Bluetooth work correctly), everything has been streamlined and improved. You can even change the DPI of the screen! However, even this has struggled recently and I’ve had several delays between doing something on the phone and it responding.

However, the latest release of ArchiKernel has made a big difference so far to the performance of my S3. It was released two days ago, and can be downloaded from GitHub. You need to make sure you get the right version – as I’m using the Samsung-based ArchiDroid ROM rather than the AOSP-based one, I use the SAMSUNG zip file. All I had to do was copy the file to my phone’s internal memory, boot to recovery, flash the zip and restart.

The phone already feels much quicker and I’m indebted to JustArchi for his work on keeping the S3 up-to-date. I would definitely be using the newer version of ArchiDroid if I could be sure my Bluetooth headset would work with it!